Join Mr. Beverly Hills and the Dirty Dawg as they discuss WCCW episode 52, WCCW from 15th of December, 1982, talking Gary Hart and his awesome line during his promo, Bugsy McGraw being Bugs-like, and the Dirty Dawg bashes the WCCW production crew for making the main event match seem silly.

Join the guys as they reviewed WCCW from Dec. 10, 1982! They discussed Bugsy McGraw being "bugged up," Checkmate's mask, the Isle of Man, Magic Dragon's wrestling attire, Ric Flair vs. Fritz von Erich's debate, why Ric Flair was so sweaty in his debate, odd home towns of WCCW superstars, King Kong Bundy's white boots, finishers outta nowhere, Dirty Dawg Darsie got confuted on what main event match spot he was discussing, and "What works and doesn't work in pro wrestling nowadays"~! 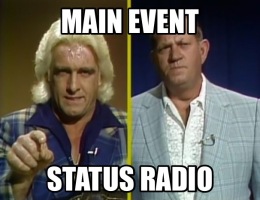 Join Mr. Beverly Hills and the Dirty Dawg Darsie as they review the FIRST WWE SURVIVOR SERIES from 1987!

Join Mr. Beverly Hills and the Dirty Dawg Darsie to review the first WWF Smackdown from August 26, 1999! They discuss WWF booking in '99, why the Dawg loves Y2J, and the SWERVE in the main event!

On this weekend’s edition of the podcast, the Dirty Dawg and Mr. Beverly Hills discuss the VERY FIRST WWF MONDAY NIGHT RAW!!! They discuss Bobby Heenan trying to seak into Monday Night Raw and Sean Mooney stopping him, what Rob Bartlett did on this episode to piss these dudes off, the power blue Intercontinental title…

On this weekends episode of Main Event Status Radio, the guys discussed WWF SATURDAY NIGHT’S MAIN EVENT episode 1!  They talked about how this compares to the Clash of the Champions show they watched the week before, Hulk Hogan’s television matches, and the Dirty Dawg gets scolded about his views of the last two matches…

On this weekend edition of the podcast, the dudes discuss the very first NWA CLASH OF THE CHAMPIONS!!!!! They discuss the 45-minute broadway between Sting and Ric Flair for the Heavyweight title of the World, how five judges were announced for the main event and two disappeared when it came down to judging, why everyone…

On this week’s edition of the podcast, the guys discuss the first WCW Monday Nitro! Everything from top stars gunning for the United States Championship, Lex Luger jumping ships, Pastamania, the Biggest of the Blubbers, thoughts about Mongo McMichael, and so, so much more!   Epiosde 009 :: WCW Monday Nitro :: Sept. 4, 1995…

American Wrestling Federation referee James Benson joins the Dirty Dawg on discussing his career as a professional referee on the independent circuit in the Minnesota area. Working with AWF, Steel Domain Wrestling, Minnesota Extreme Wrestling, and Ring of Honor, along some experiences with some wrestlers in the AWF! James talks about his training, what got…